How to promote money transfer companies to Polish expats?

Many Poles live outside of Poland. Therefore, the demand for money transfer services is constantly growing. The market is constantly expanding and becoming more difficult to gain the trust of already distrustful Polish customers. However, there are several effective ways to promote money transfer companies, directing their message to Polish expats. Here, we present the most effective, along with the best examples from the market. 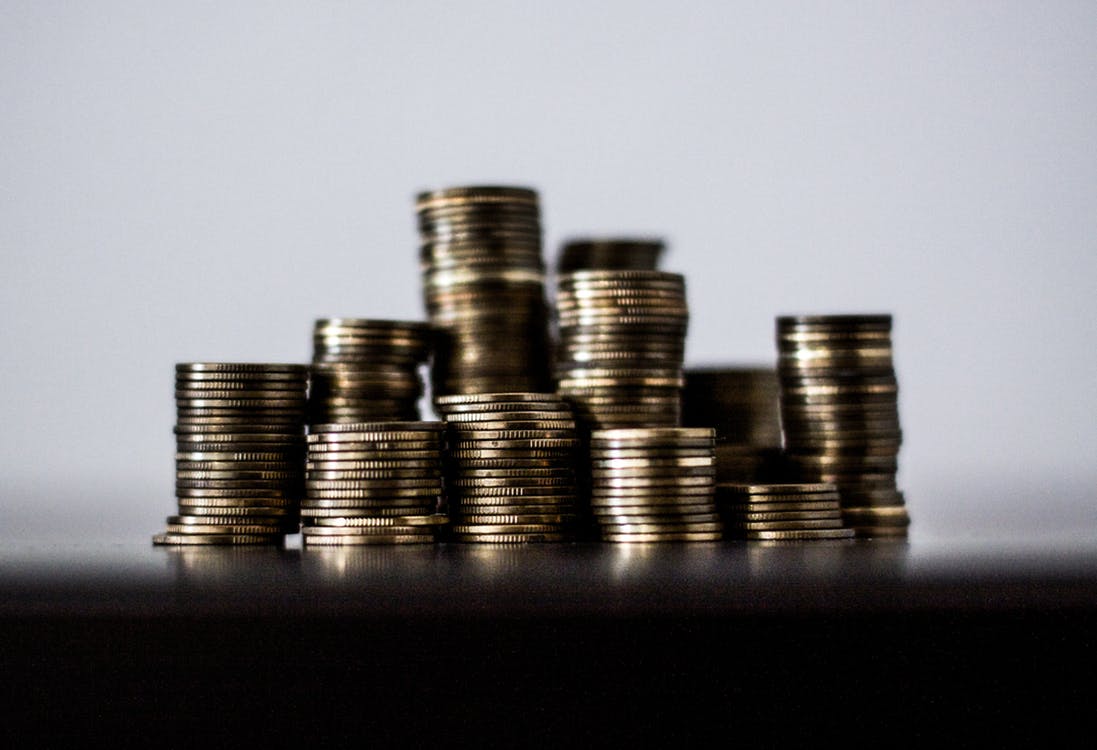 Media Relations is the main part of effective Public Relations activities for money transfer companies because of their specific target – expats. PR departments must have irreproachable relations with the media, especially those often visited by Polish immigrants.

For example, TransferGo has an excellent relationship with the media. The company uses the possibility of media appearances of the company’s employees. As a result, they not only broaden their target and get to know their new potential customers, but the media presence also builds the brand’s authority among public opinion. Country manager of TransferGo, often appears on the Internet and in traditional media too – such as magazine Superbiz or TVN24 television. In having good relations with media you can easily maintain the company’s communication with the social environment in which you want to advertise.

Money transfer companies have a wide range of promotion possibilities. Their advertisements are often found in public places and on various modes of transport, where hundreds of foreigners pass every day. A great and witty outdoor campaign was released by TransferWise, whose advertisements inundated the subway.

Azimo went a step further in personalising the messages in their campaign. Azimo (originating from Poland, now based in London) did an excellent outdoor campaign directed precisely at the Poles living in the UK. They used the name of the most famous Polish football player-Robert Lewandowski. His name is obviously known to most sports fans around the world, but of course, these ads particularly attracted Poles’ attention: 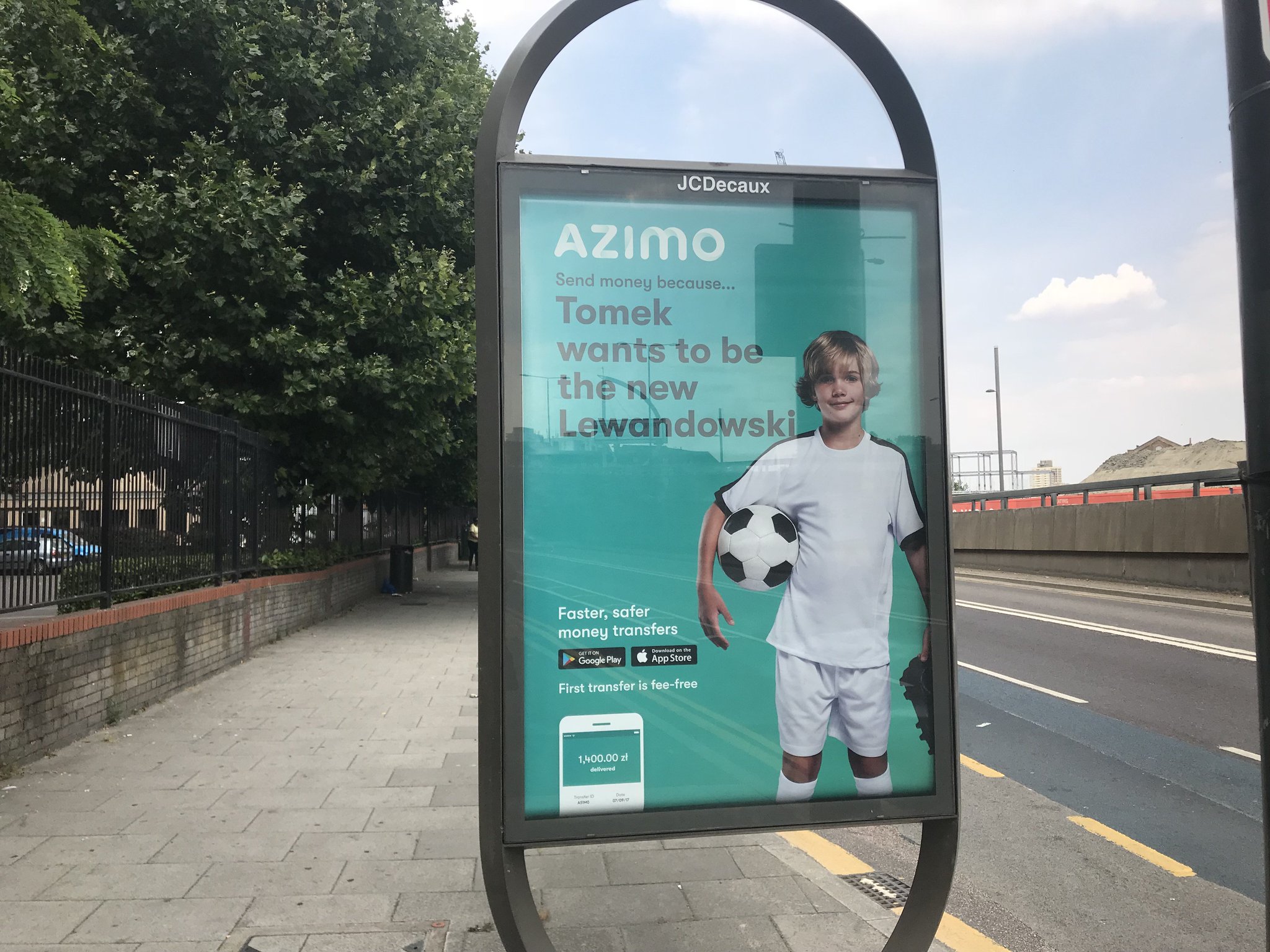 Events cover a number of participation styles. The company can organise their own event (but it is not that popular or effective in the money transfer trade). More efficient is to take part in local events addressed to Poles or expats in general and where a company can reach a wider group of Polish customers. This is exactly what MoneyGram do at the London’s Days of Poland Festival. This is an annual celebration of Polish culture that brings a taste of the eastern European country to the city. MoneyGram is one of the main sponsors of this big event: 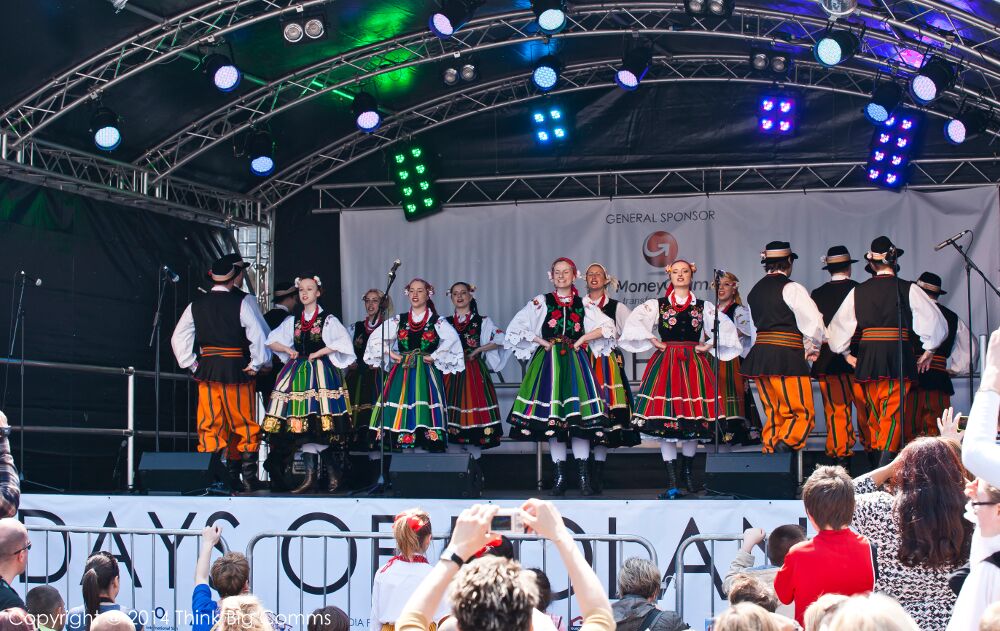 The Congress of Polish Entrepreneurs 2018 in London was another good example of patronage. Sami Swoi company even appeared in the information bulletin for the participants as the best money transfer company:

Global events are another idea. This was used by Western Union, who sponsored the UEFA Europa League 2017/2018 match that took place in Poland.  Big ads and banners with the brand logo appeared on screens during the matches. The event was also supported by a promotional campaign in the UK. Western Union customers from Poland even had the opportunity to win match tickets. The whole action was promoted by leaflets handed out, for example, in Polish taxis: 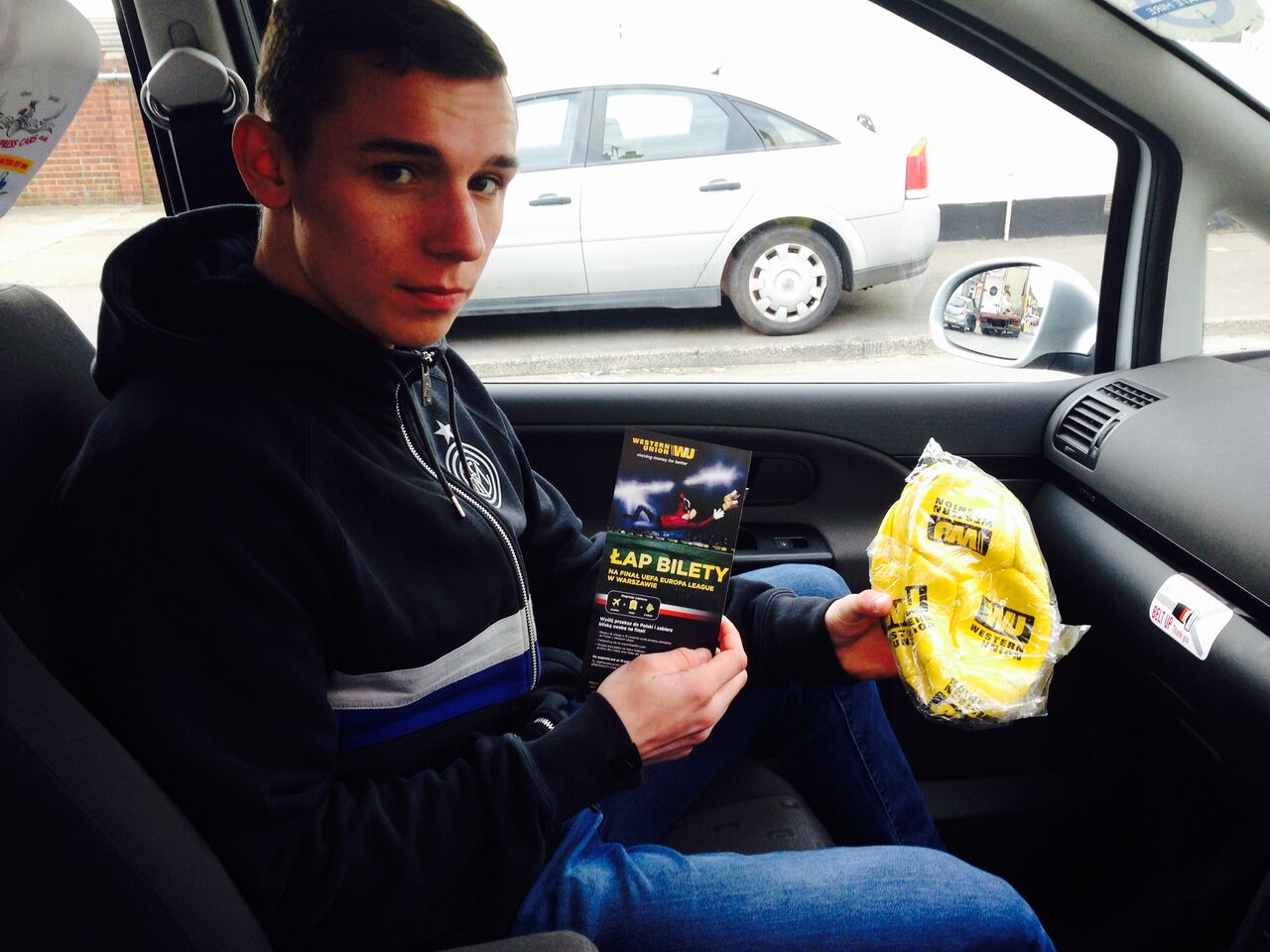 Sponsored articles are a key element of effective marketing communication, especially in the industry, that not many people are familiar with.

Many brands write sponsored articles for popular financial websites dealing with currencies and international transactions, advocating helpful and expert advice. These websites are mostly visited by people living abroad. It is worth publishing sponsored articles (both on the Internet and in traditional press) from time to time, because of their effectiveness in reaching recipients’ awareness, verifying expert status, as well as securing new clients. TransferWise and MoneyGram are the real masters of publishing helpful articles on most popular websites.

TransferGo focuses on addressing the Polish media, so their sponsored articles are mostly in the Polish language:

In this industry, an effective influencer marketing campaign is really difficult. Money transfer companies can gain the most by cooperating with big influencers who live abroad or travel very often. Influencers must be popular enough to be recognisable not only by people living in Poland but also by those from abroad. This combination is the first step to the success of the campaign. A great example of influencer marketing activities was last year’s PayPal cooperation with Krzysztof Gonciarz (Polish Youtuber living in Japan), who is credible and Poles living all over the world watch him. He made a casual video about Christmas presents:

Another way for a successful influencer marketing campaign could also be the acquisition of a brand ambassador. TransferGo has created huge promotional campaigns with influencers from three countries: Poland, Romania, and Lithuania. The Polish brand ambassador was Piotr Żyła – one of the most popular and charismatic Polish ski jumpers. The publicity of the campaign was very wide, especially among expats:

Programmatic campaigns are carried out on the Internet through advanced purchasing platforms. The process is fully automated and enables precise access to specific target groups, with a personalised message. The sale of space on the pages takes place in an auction model. A well-designed campaign is targeted at visitors on specific websites. In the case of money transfer companies, the selection of advertising space is relatively easy due to the large number of visits and searches on favourite portals dedicated to expats.

Another idea is mailing databases and sending customised email messages for various groups targeted at potential clients among Polish expats.

Social media is the fastest and easiest way to communicate with fans. It is worthwhile releasing dedicated content, especially for specific social and national groups. PayPal has a Facebook profile in Polish language, addressed to users both from Poland and Polish expats. MoneyGram and OpalTransfer run their social media for all clients, but each post is dedicated to different nationalities. Thanks to that, their communication is coherent. Relevant content reaches the representatives of a specific audience. It would be wise to have a consultant who can help avoid any mistakes in communication with Poles. 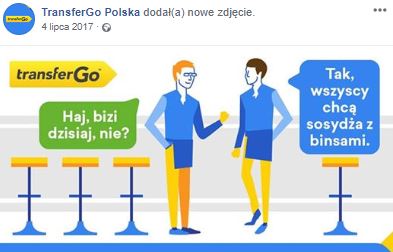 Two Polish companies operating on the UK market, Sami Swoi and Minutka, have Facebook profiles dedicated specifically to the Polish community. This is a great solution because the content is even more personalised for the target group. Minutka uses Facebook to update important information such as the dates of transfers: 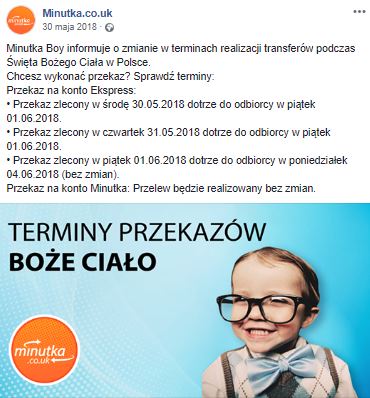 A perfect idea is to create a company blog that is 100% dedicated to foreigners. That’s what Western Union did and it worked very well. Their blog is full of articles such as “10 affectionate terms from around the globe”. TransferGo with their blog “Migrant life” went even further. Each article is directed either to expats in general or to individual representatives of specific nationalities living abroad. There is also some content for Poles: 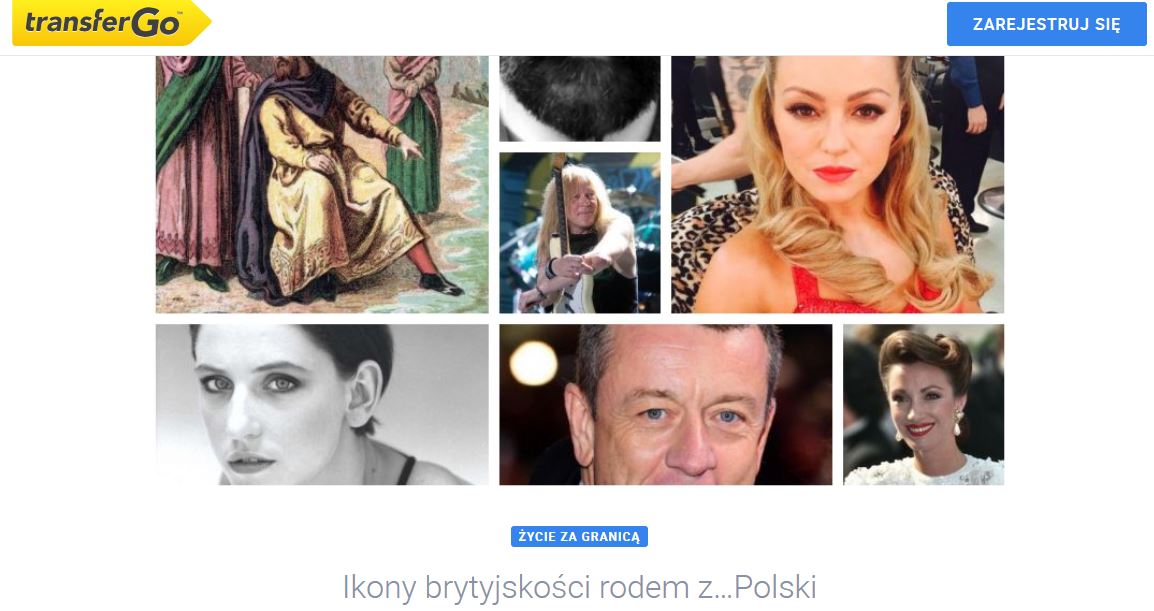 The brand also has another blog in the Polish language:

Every country has some areas that are often visited by expats. It is worth using this in your outdoor campaign directed to such a target. Outreach works great in hot spots such as Polish stores, shops, offices or service places. For example – Western Union often distributes their leaflets, and MoneyGram organises information stands in public places: 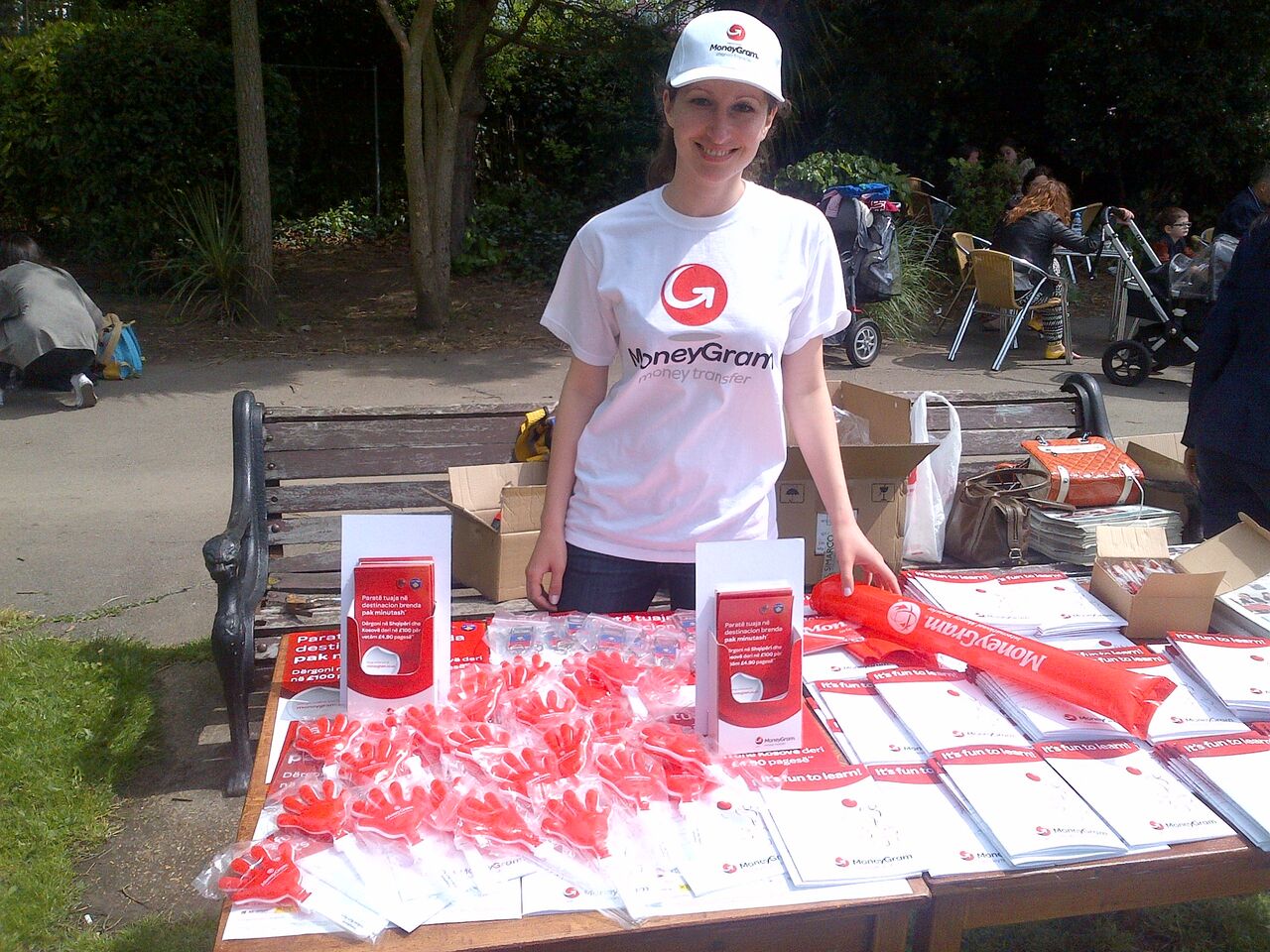 If you need a professional advertising agency who can help you run the perfect money transfer promotional campaign or just implement one-time marketing activities, feel free to contact us. We have big experience in running marketing and PR activities dedicated to Polish expats. A huge part of the aforementioned examples were our activities. We are ready to make your money transfer company become one of the biggest brands in this trade.