Don’t have an idea for a Facebook post that will engage your fans? Here are 5 examples from our Polish campaigns that will really help you.

1. Make a choice
Choosing A/B works well almost every time. But, if you want to do it really well – make the choice a little emotional. Here is an example from Morliny UK, where fans decide which Polish regional cuisine is better: silesian or lubelska. The Polish community chose cuisine with better dishes, but in fact it was also a subconscious battle between regions and between the west and east parts of the country.

2. Live stream
Facebook like videos, and even more, they like live streaming. The FB algorithm makes it the most wanted kind of content. So, now you can easily make your fans not only read your posts, but also watch you. On ExcellenceVale fanpage, the owners of this Polish business use it every week, and not only tell fans about plans and offers, but also give a lot of tips. Every time, live streams have an organic reach bigger than the number of fans on a fanpage. 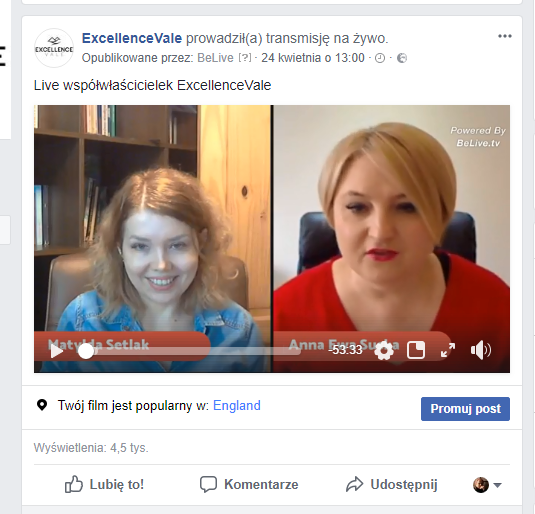 3. Real Time Marketing
When everybody talks about something, why not redirect that discussion to your fanpage? When it’s something you cannot only talk about, but also show – why not ask for photos? In this case, when we had quite a big snowfall in the UK at the beginning of March, we asked fans to show what they did with it, and we got not only 30 photos of snow sculptures, but also 273 likes and 38 shares.

4. Infographics
We know that the human brain can process images up to 60,000 times faster than words. We also know that infographics are 30 times more likely to be read than a text article. But how do you design a Polish infographic that will engage fans? Maybe a… jigsaw? On Pol-Plan Insurance’s page we asked ‘who has priority on the road?’ This received not only comments, but a real discussion.

5. Post with suspense
Job for your designer and for your creativity: Facebook graphics have a common size, but if you make it higher (i.e. 500 x 1130 px), you will have half a graphic shown, and the whole, only after clicking on it. On Morliny UK’s page we wrote in the post the warning “Carefully…”, and in the graphic there was a sausage asking “Will you hug me?” with an arrow pointing to “Click”. After clicking, the sausage gets a little angry and says “Not so hard, you savage!” This kind of post gives you not only comments, but primarily, shares and tagging friends (viral potential).