German Lidl and Portuguese Biedronka have been competing with each other in the Polish market for many years. It is obvious when we, for example, look at their promotional offer. However, this year the competition has become more intense and the chains keep offering special discounts for their customers, trying to prepare a better offer than their competition.

It started with Lidl and its promotional action with posters and the following radio slogans: “Do shopping for a minimum of 100 PLN and you will get a 20 PLN voucher for the next one”. Customers could receive vouchers between 22nd and 28th August and use them until 4th September, during their next shopping, providing they spent at least 100 PLN. 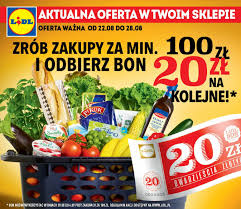 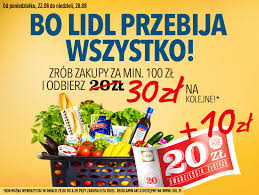 On the following day, posters with the following note: “In Biedronka you may get a direct rebate of 25 PLN” appeared in Biedronka stores over the whole country. It was obvious that this was a response to Lidl’s promotion. Biedronka offered 25 PLN rebate for each first shopping worth 199 PLN. The promotion was to last from 23rd to 28th August. However, just like in Lidl, such products as alcoholic drinks, tobacco products or food for infants were excluded.

Lidl did not lag behind and on 25th August announced that for each shopping worth 100 PLN each customer will receive a 30 PLN voucher. Moreover, the clients who had earlier received vouchers worth less got 10 PLN extra. The slogan of this campaign was: “Lidl overtakes everything!”

The aim of end-of-August promotions is to remind customers to shop in their favourite shops after the holiday period. Aside from that, the beginning of the school year is also the best moment to acquire new clients. In marketing this period is called “back to school”. Another such period is Christmas time.

Promotions are also tools which help to keep fussy Polish clients. It is known that Poles like when the store is close to their home, they can choose good products at a reasonable price and do not become attached to any chain. Edyta Kochlewska, the editor in chief of dlahandlu.pl website, during a conversation with “Gazeta Pomorska” daily reporter said: Biedronka is a leader in the market, but this doesn’t mean it can rest on its laurels. (…) It cannot stop its struggle. The reason is simple: Poles definitely are not loyal clients.

According to an Open Research report, they are usually attracted by low prices of products. As many as 57% of Poles think that a price cut is the most attractive form of promotion. Having this in mind, Lidl and Biedronka do everything to acquire new clients, including those who could take part in the 500+ programme (we wrote about it here) and to keep the current position on the market. Consequently, the aim of the battles between these two discount stores is to attract more clients.

These are mainly customers that benefit from discount stores’ competition, as they may buy products cheaper. Now Biedronka encourages Poles to register Moja Biedronka card which aims to make clients more attached to the chain. Some people think that this is just the beginning – gathering clients’ data in order to prepare a database which will be needed later.

Competition on the Internet

Thanks to websites, customers can check current offers and available promotions, as well as take advantage of recipes and culinary guidebooks. However, the analysis carried out by Gemius in 2015, shows that the Lidl website has more visitors. This is surely the result of some investments in content marketing about which we wrote here (link). On average, it was visited by 10% of all Internet users in Poland, every month. In the case of Biedronka, the result is 7%. As many as 50% of users who visit the Biedronka website, go to the Lidl website as well.

Quite a big proportion of visitors of both websites are people who claim to have post-secondary or higher education. Aside from this, the Biedronka website is particularly often visited by people from small towns (up to 20 thousand inhabitants) and the Lidl website is mostly visited by Internet users from bigger cities (more than 200 thousand inhabitants). The investment in content marketing attracts richer and more aware consumers!

Are you interested in Poles’ shopping habits? Read the article “I prefer Polish products. Consumers in Poland demonstrate patriotic behaviour more and more often” about the changing attitudes of Polish consumers.