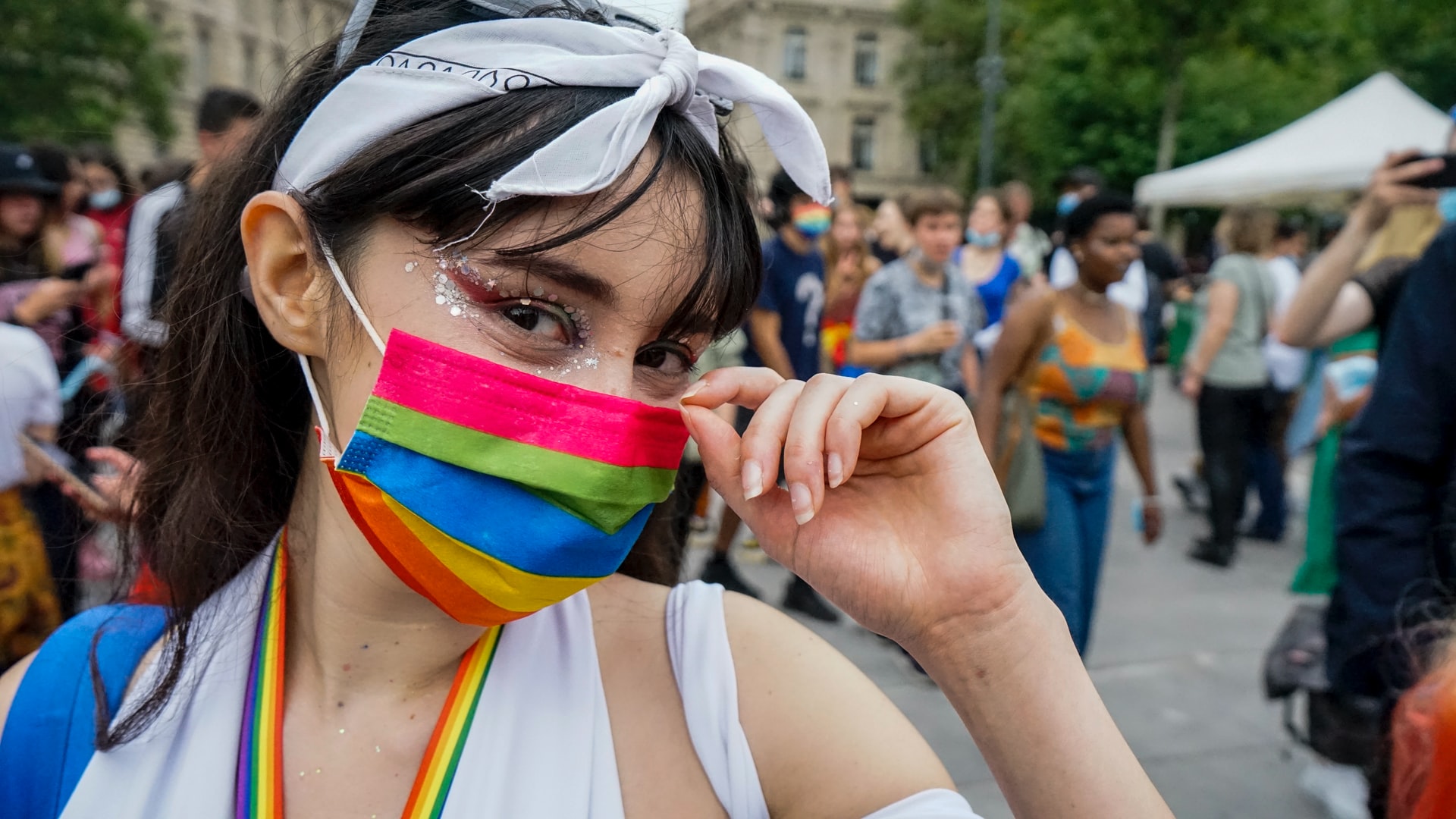 June is Pride Month for the LGBT+ community in many countries. It is celebrated around the world with equality marches and the symbol of the rainbow flag. In the USA or the UK, the public support of Pride Month by brands is not surprising. Most of them plan special campaigns, promotions or products for this time, the sales of which are donated to organisations such as the Polish foundation Stonewall.  How does this look in Poland, which, according to research, is the least LGBT+-friendly country? Is it possible to support Pride Month without endangering Polish customers? How have brands operating on the Polish market approached the topic this year?

Poland and attitudes towards the LGBT+ community

The results of the research are clear – Poland is a country with a low LGBT+ friendliness index. In 2022, it ranked last among all European Union countries for the third consecutive year in the LIGA-Europe ranking measuring the level of equality for LGBT+ people. In a study assessing both legislation and the practice of law application, Poland scored only 13 points out of a possible 100. Reasons for this include the current rule of an ideologically right-wing political party and the large role of the Catholic Church, which is followed by the traditional family model.

The approach of Poles themselves – although becoming more open to the LGBT+ community every year – still differs from the norms common in the West. Surveys by the Public Opinion Research Centre (CBOS) show that Poles’ attitudes are still characterised by a high degree of distrust. More than half of Polish citizens consider LGBT+ communities to be “deviations to be tolerated”, while only 23% consider it “the normal state of affairs”. One in five Poles declares a lack of tolerance towards LGBT+ people.

How do these statistics relate to the marketing reality in the Polish market?

Pride month and marketing in Poland

Looking at the data above, it is not difficult to conclude that Poland and Polish customers do not like brands that openly promote equality for the LGBT+ community or engage in Pride Month activities. And indeed – raising the topic of sexual minorities in marketing communications will involve some risks. Many marketing experts even advise foreign brands to halt or tone down communications that touch on Pride Month. They fear a wave of criticism from Polish customers, a drop in positivity in the eyes of consumers or even a boycott. It even happens that global brands are refraining from displaying the rainbow flag exclusively on Polish social media profiles in June. This year, for example, this was seen on BMW’s profile.

On the other hand, not all brands have the support of sexual minorities written into their mission statement. They are under no obligation to publicly manifest their support for Pride Month. It is also worth noting that Polish consumers, by definition, do not like brands’ involvement in political topics. Most do not expect manufacturers to publicly announce their positions on controversial issues or social events.

However, with each passing year a change is visible, and on social media profiles one can see more and more official statements of support from brands towards the LGBT+ community. An interesting example of this is the Polish branch of the Sprite brand, which last year produced a series of podcasts entitled ‘Let’s be clear’ in collaboration with Stonewall. In them, Polish YouTuber Krzysztof Gonciarz and rapper Quebonafide talked to representatives of minorities about their problems.

Interestingly, this trend has also been picked up by many domestic brands from Poland. However, this is still considered to be a bold and highly risky action in terms of image (especially if the relevant customer group is older people).

Brands in Poland and Pride Month 2022

So which brands in Poland have joined the June celebration of diversity? Here’s our ranking of interesting actions in various industries to celebrate Pride Month 2022:

The Polish computer games publisher is actively involved in Pride Month activities every year. It was no different now, when the brand not only changed its social media logo to rainbow, but also announced several dedicated actions. One of these was the Pride Charity Stream – a charity stream of CDPR games. As the brand promised on its Instagram, all money earned from the stream will be donated to the Polish organisation Kampania Przeciwko Homofobii (The Campaign Against Homophobia).

Once again, the Polish manufacturer of colourful socks did not surprise with its active involvement in Pride Month activities. This year, to mark the occasion, the brand announced the launch of a new product called ‘Pride Box’ with the slogan ‘Many Colors of Love’. At the same time, it announced that it would donate 100% of the earnings from sales to the Polish division of the Stonewall Group organisation.

Tatuum is another Polish clothing brand that has publicly expressed its support for the LGBT+ community on the occasion in June. Like Many Mornings, it has launched clothing (in this case sweatshirts), the total profits were donated to the Equaversity Foundation.

The activities of the Polish branch of the multinational corporation NTT DATA Business Solutions are a flagship example of the fact that, even when operating in the technology sector, there is room for sharing the values embedded in the core of the brand identity. In June 2022, the brand changed its logo to a rainbow one and published information about ‘rainbow boxes of inspiration’. As stated, this campaign is designed to engage employees in the company’s offices to share their ideas for activities related to promoting diversity in the organisation.

Although this year’s Pride Month campaign from H&M is not a dedicated effort exclusively for the Polish market (but merely a translation of an international campaign into Polish), it is still worth paying attention to. The ‘My Family of Choice’ campaign is a series of interviews with LGBTQIA+ families accompanied by dedicated photo shoots. Among them are Spanish directors Javier Calco and Javier Ambrossi with Lola Rodriguez. The campaign as a whole is educational in nature and aimed to give a glimpse into the lives of families operating in non-traditional models.

The Polish clothing brand Kubota boasts equally interesting educational activities. In June, its profile on Instagram lit up with bright colours and a series of posts supporting Pride Month – all bearing the slogan ‘Are you tolerant? Yes, but… there are no buts’.

Finally, one of the most interesting Pride Month campaigns to appear on Polish social media. Throughout June, the Instagram profile of taxi ordering app Free Now featured a series of educational posts about LGBT+ people and more. These included explanations of what Pride Month is, how to properly speak about LGBT+ topics and a guide on how to support this community.

So how do we approach the topic of Pride Month in the Polish market?

If supporting equality is not part of the brand’s mission, presenting views is not an obligation. The vast majority of brands operating on the Polish market skirt the issue by simply continuing with standard communication. However, if you decide to support Pride Month (e.g. on the brand’s social media), it’s worth thinking about a few things beforehand.

1. Fit the action into a long-term strategy

Nothing irritates Polish consumers more than a lack of sincerity. It is worth remembering that for support for the LGBT+ community or commitment to Pride Month promotion to be credible to audiences, it should be embedded in the overall brand strategy. Such ad hoc actions can create unnecessary suspicion of trying to ‘strike out’ on a high-profile topic. Besides, long-term support for equality will reflect positively on the brand image among like-minded people. And more and more young Poles are citing a brand’s social commitment as one of the important buying factors.

2. Once you have defined yourself, stick to values

“Only a cow does not change its views” – says a famous Polish saying, which indicates that views can change throughout life. Unfortunately, in the case of brand activities, this principle can backfire. In building a brand’s reputation on the Polish market, a consistently implemented strategy is essential. If one year a brand endorses Pride Month and donates money to an organisation fighting for equality for minorities, and the next year it simply skips the issue, this will be a red flag for customers.

3. Rethink the purpose of the action

As with any marketing or PR activity, Pride Month’s support must have a clearly defined objective. This will make it easier to select the tools to achieve this goal. Most brands operating on the Polish market follow one of the following models:

4. Be prepared for criticism

There is no denying that such a controversial topic in Poland will not go without negative comments on the brand’s profiles. For many Poles, Pride Month or the rights of the LGBT+ community are a pretext to start online arguments. It may happen that some customers leave the brand outraged by the announcement of such a company policy. This should be taken into account and should be factored into the balance sheet of possible losses in advance. From a PR point of view, the worst possible step would be to withdraw from the views already expressed.

5. Be wary of pinkwashing and rainbow capitalism

Every June, there is a rash of rainbow-coloured products in online shops in Poland. Unfortunately, there are still many brands which use the catchy theme purely for marketing purposes, to boost sales. You should not be surprised, therefore, if comments appear on your brand’s profile, accusing pinkwashing or rainbow capitalism, i.e. a desire to get rich from supporting Pride Month.

Are you just entering the Polish market and need support with your PR and marketing strategy? Or are you already targeting Polish customers with your communications, but your actions are not having the desired effect? Contact our experts! We are a Polish advertising agency that has been supporting foreign brands in strengthening their reputation and increasing sales on the Polish market and throughout Central and Eastern Europe for many years.