Warsaw brand – creative drive in the centre of Europe

After the UK leaves the European Union, other European capitals may have their day. What does the Warsaw brand offer its customers?

People from other countries are more and more interested in Poland and its capital. The Warsaw brand is ready to “keep its promises” as a city of dynamic development, creative drive and improving quality of life. Ten years after Poland entered the EU, it is perceived by European political, business and cultural elites as an important – from a political and economic perspective – member of the EU. Aside from this, recent events in Europe have put Poland in the spotlight.

Every year in Warsaw there are about 25,000 business events (congresses, conferences, fairs, motivational events). In comparison to other Polish cities the capital of Poland has the highest position in the ranking published by ICCA, the most important international organisation of the congress industry. More than 26 thousand beds in hotels, including more than 12 thousand in 4 and 5-star hotels, provide services for the event and conference industry.

Thanks to its rich history, Warsaw has many varied facilities for events and gala dinners. Offers include elegant palaces, villas and postmodern properties, as well as huge sports venues, such as the National Stadium built for Euro 2012, and where the NATO summit was recently held.

Among Poles, Warsaw has the reputation of a cultural mecca. There are more than 60 museums, including the POLIN Museum of the History of Polish Jews, which was granted the title of The European Museum of 2016 (European Museum of the Year Award).  The Copernicus Science Centre was visited during that NATO summit by the Prime Minister of Canada, Justin Trudeau, and his son Xavier. Aside from these two prestigious museums, there are 13 concert halls, 38 theatres, 44 galleries and 27 cinemas.

City of the free people

Such was the title of the exhibition in Galeria Plenerowa, organised by Miasto Stołeczne Warszawa in 2011, on the occasion of the beginning of the Polish Presidency in the European Union. As we can read on estrada.com.pl, the exhibition “presented Warsaw as a steadfast city, known for the creative contrariness of its inhabitants who have always, even in difficult or miserable times, fought for freedom and civil liberties. This is a place where innovative trends in science, culture and social life came from.”

Warsaw is also an open city. Its inhabitants are mainly incomers from various parts of Poland; their help gives the city energy, power and creative drive. They encourage entrepreneurship and individual activity. This is the New York of Central and Eastern Europe, a city of huge dissonances, diversity and contrasts. It attracts many interesting people who want to make a career, people with ideas and aspirations. These are people who want to earn a lot of money, as well as to develop.

Warsaw’s inhabitants have got used to deciding about their life and environment on their own. They are the driving power of the capital and its most important force. Warsaw dwellers are independent and tend to take non-standard measures. A good example is the Warszawska Masa Krytyczna, a monthly bicycle ride through the city; its aim to promote the bicycle as an every-day mode of transport, and the struggle for a new cycling infrastructure. 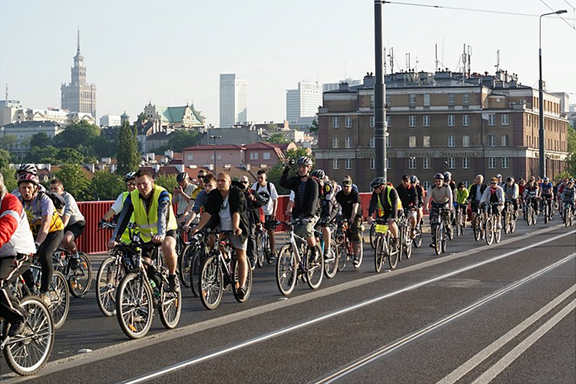 A European-class city – Warsaw, as the only city in Poland – belongs to a network of global cities, strengthens its positions, as well as attracts the creative sector and investors. It competes with other European capitals in terms of investors, tourism development and the creative sector. In the twenty first century, Warsaw makes the pre-World War II dream come true – the dream of the legendary team led by Stefan Starzyński, who wanted the Polish capital to be a European-class metropolis.

More than 70 universities and high schools create a base for attracting ambitious students and provide some space for many debates, experiments and start-ups. Warsaw, as a dynamic and open-minded city, encourages people to be active and realise their aspirations, as well as lets them implement their creative ideas. Targi Śniadaniowe is one such example which was initiated in Warsaw. Once a week, on Saturdays, the capital inhabitants meet and have breakfast together. People liked the idea and the initiative spread to other Polish cities.

Thanks to the initiative of the City Hall of the Capital City of Warsaw, start-up initiators may meet in a few entrepreneurship centres, including those on Smolna, Powstańców Śląskich and Targowa Streets. Here, they not only find some space for work, but also support in running their businesses.

If you need help during the organisation of some events in the capital, you may use the services provided by the All 4 Comms agency!